Follow in the footsteps of the 20th Century’s artistic elite, and marvel at the vistas that inspired their work.

Cadaqués, Cap de Creus and Cotlliure, or “The Three C’s”, are possibly the three most beautiful and picturesque settings along the Catalán coast. While Cadaqués and Cap de Creus are on the Spanish side, Cotlluire (or ‘Collioure’) is located just North of the border, in France. Each place is unique and enchanting. 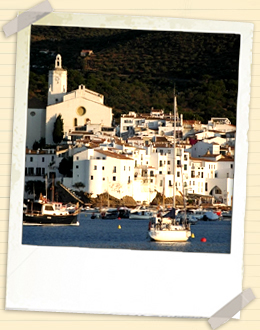 Visit all three in a one-day Road Trip, with your own expert guide, who will pick you up early in the morning. Together, you’ll set out on this one-of-a-kind adventure, with the wind in your hair.

1st Stop: Cadaqués, the most illustrious town of the ‘Costa Brava’. You’ll meander down curvy cobblestoned alleyways to explore this quaint white fishing village, with blue doors and windows. A romantic summer getaway, Cadaqués maintains its magical glow year-round. Depicted in countless films, novels, and other works of art, this tiny paradise has long sparked the creativity of poets, writers, painters, and the like, including the legendary Catalán Surrealist, Salvador Dalí, who used the town as the backdrop for many of his masterpieces. The peculiar genius lived in a nearby, secluded cove, in a quirky “palace” which he designed.

2nd Stop: head ten minutes up the coast to Cap de Creus, one of the most special places on earth. The easternmost tip of Spain, it consists of unusual rocky landscapes (resembling the moon!), sparse vegetation, and steep cliffs overlooking hidden coves and turquoise water, into which you can dive directly from the rocks. The only manmade structures are a lighthouse and rustic restaurant, where we’ll stop for a fantastic lunch, with astonishing views. Their specialties are fresh fish and, oddly enough, curries! You’ll be enraptured by the singular energy of this remarkable spot.

You won’t want to leave, but we’ll pull you away and onto your third and final destination.

3rd Stop: Cotlliure, yet another storybook town, with winding streets and a castle overlooking a crystalline bay. Having belonged to the Roman and Visigothic empires, and to the kingdoms of Roussillon, Aragon, Mallorca, the Hapsburgs, and the Bourbons, Cotlluire’s dynamic history is apparent everywhere you look. Like Cadaqués, Collioure was also an artists’ refuge, most notably to the Fauvists. Reproductions of works by Henri Matisse and André Derain line the streets, each placed where its original was painted. Braques, Picasso, Dalí, Chagall, Mackintosh, Machado and Foujita were just a few of this ‘pueblo’s’ other notable regulars. Don’t forget to sample their fine local red wine, “Collioure” (named after the town), or the Banyuls dessert wines, famous throughout Europe.

As with all of our day trips and excursions, there are different ways to enjoy this experience – please let us know what you’re looking for, and we’ll happily find a way to accommodate your requests…

The Road Trip is a very full-day excursion, in which half of your time will be spent in the car.

This experience depends greatly on you and your interests.

Please let us know what you’re looking for…

In the winter months, when the sun sets earlier, we recommend shortening your Road Trip to include only Cadaqués and Cap de Creus, or Cotlliure. Without the pressure of a third destination, you’ll be able to explore each town and their surroundings in greater depth, and at a more leisurely pace.