What is it about this city that captures peoples’ hearts and captivates their imaginations, leaving everybody wanting more?

Barcelona natives are convinced they live in the world’s most alluring city. This attitude may seem arrogant, but as foreigners continue to flock to Barcelona in boatloads, finding it increasingly difficult to leave, and always desperate to return, you are forced to wonder whether its locals aren’t so much cocky as they are correct. 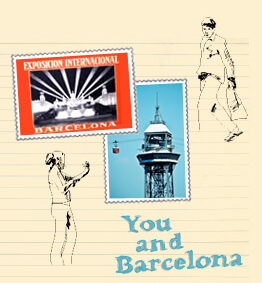 Why should you experience the REAL Barcelona?

Barcelona represents an intriguing blend of Spanish spirit and tradition with the class of Paris and the personality and politics of San Francisco, imbedded in a historical context similar to that of Rome. Barcelona is as colorful as Amsterdam, with the nightlife of Buenos Aires, the diversity and artistic flare of New York City, and the bohemianism of California’s Venice Beach. Add a creative industry rivaling Scandinavia in design and Milan in fashion, and finally, bless it with a Mediterranean climate and cuisine, beautiful beaches and mountains, and an unparalleled architectural legacy, and… This is Barcelona…

Many call it “enchanting” and “magical.” All would agree it’s unique. The curious collisions between old and new, Spanish and European, traditional and avant-garde, conservative and liberal, busy and relaxed, all help in proving Barcelona’s case. Even its native language, Catalán, is distinctive.

As you ramble down the streets of Barcelona, the faces around you seem surprisingly familiar; this city of close to two million inhabitants somehow feels intimate, like a tiny village. Regardless of your hair color, style, or sexual persuasion, you will likely pass unnoticed amidst the eclectic patchwork that is so celebrated and appreciated in this city.

While Barcelona boasts thousand-year-old ruins, Europe’s oldest parliament, Spain’s wealthiest citizens, and the world’s most celebrated edifices, such claims have not deterred infinite protestors and activists, skateboarders, and street and graffiti artists from performing their usual activities in its public parks and ‘plazas.’ In Barcelona, you can stroll past Gothic cathedrals and Michelin-star restaurants, naked, without breaking any laws! And, you might find yourself dodging drug dealers, pickpockets, prostitutes, and puddles (of pee), en route to visiting some of the world’s most magnificent monuments.

Barcelona’s ritziest boulevard is most known for a cluster of buildings whose designs are more similar to what you’d expect from a Dr. Seuss story (or an LSD trip) than what you’d normally find in such swanky surroundings. World-renown artists and architects who’ve made names for themselves in Barcelona have done so coining revolutionary techniques and styles, riddled with elements of surrealism and fantasy.

It’s no wonder that Barcelona is selected, year after year, to host countless corporate conferences and conventions, sporting competitions, trade fairs, festivals, study abroad programs, and other large-scale international events. Everyone is looking for an excuse to visit this vibrant and tempting metropolis.

Above all, Barcelona is fascinating. No city is quite like it.

Come and try it… Just be prepared to spend the rest of your lifetime yearning for that “fix.”

The Best Pictures of Barcelona

Tempted to visit Barcelona? Our gallery of the best of Barcelona may convince you.