Explore an alluring seaside city, once a capital of ancient Rome.

Two-thousand years ago, the city of Tarragona – known then as ‘Tarraco’ – was one of the most important in the Roman Empire. Located an hour and a half south of Barcelona, and built on a terraced slope, ascending upward from the Mediterranean coast, Tarragona is not only rich in history but also breathtakingly beautiful. With waves that crashed upon its mighty walls, and its main temple, visible from miles away atop the imposing hillside, the city must have been quite a sight for those arriving by sea. Due to Tarraco’s abundance of ruins – all pointing to a triumphant past – many have deemed it the “Mini Rome”. In fact, Emperor Augustus considered it the most spectacular city in his empire after Rome, and lived there himself for three years. 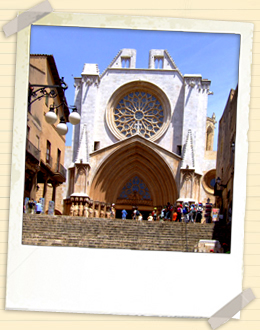 On this excursion, you will meander leisurely through the cobblestoned streets and picturesque ‘plazas’ to unearth the relics of Tarraco’s venerable past, while soaking up the delectable charm of modern-day Tarragona. We will illuminate, for you, its most fascinating historical monuments, including the stunning Romanesque-turned-Gothic Cathedral, built on the former site of the temple to the Emperor; the Circus Maximus, around which four-horsed chariots once skidded dangerously; and the amphitheater, where the roars of thousands once provided the only glint of hope for scantily-armed gladiators forced to compete with bloodthirsty beasts.

To escape the summer heat, we’ll take you to a shady spot to sip on a refreshing glass of fresh ‘horchata’. And, for lunch, you’ll have your choice between a wonderful buffet-style restaurant, offering a wide selection of the most traditional, homemade dishes, or a finer dining option, on the charming outdoor patio of a former Baron’s mansion.

The Great Tarraco is a full-day experience, which includes approximately 5 hours to explore the city on foot, discover its many monuments, and have lunch, plus 2-3 hours of travel time. In order to maximize your experience, we’ve designed a full itinerary, so unless otherwise requested, free time is limited.

As with all of our day trips and excursions, there are various ways to enjoy this experience – please let us know what you’re looking for, and I’m sure we can find a way to accommodate you. Ask us about the “Bare Bones”, “Deluxe”, and “Bells n’ Whistles” options.

This experience depends greatly on you and your interests.

Please let us know what you’re looking for…