Get up close and personal with a rebellious, adolescent Picasso and his works.

Pablo Ruiz Picasso lived to be 91 years old, dividing his time between Spain and France. He took the world by storm wherever he went with his persistent non-conformism and steadfast anti-fascist beliefs, notorious womanizing, and above all, his rule-breaking approach to the oldest existing art form. Pablo spent only eight brief years in Barcelona, from 1895 – 1903, yet somehow, couldn’t quite shake the city from his mind: “This is where it all began…where I learned how far I could go” he once remarked. In fact, Barcelona was the witness to many of the young artist’s “firsts”: as an art student, meeting well-known established painters, painting in his own private studio, not to mention putting on his first gallery shows! 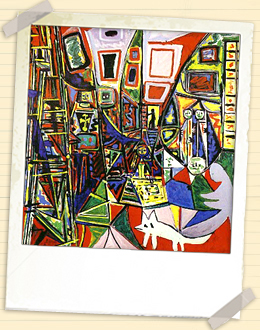 Turn yourself over to our resident Picasso expert, an art critic and professor living and teaching in Catalunya.

It was no accident that an innovator like Picasso got his start in turn-of-the-century Barcelona, one of the most creative, exciting and ground-breaking decades in the city’s history.

Turn yourself over to our resident Picasso Expert, an art critic and professor originally from Vancouver who has spent over 20 years living and teaching in Catalunya. Not only will you enjoy a guided tour, room by room, of the legendary Picasso Museum, but you’ll also zigzag through the historic back alleys where Picasso lived, painted, and studied throughout his teenage years. You’ll also walk by settings that appear in the artist’s earliest works and hear little-known anecdotes from the painter’s extraordinary life and his short, but eventful stint in the murky depths of Barcelona’s Gothic Quarter. Half of this experience will be strolling through the streets, and the other half will be in the museum.

These tours are subject to the availability of our art critic. We also run this tour with other highly qualified and experienced guides from our regular team.

There are various ways to enjoy this experience

Let us know which works best for you

This tour is highly specialized and concentrates primarily on Picasso, his life, his works, and points of historical interest. For a broader experience of Barcelona’s historic neighborhoods – which can include information on Picasso and a stroll by these points of interest – we recommend you check out “Undiscovered Corners of the ‘Barrio Gótico’”.